With the eyes of the world upon the excavation of the ancient tomb at Amphipolis and with archaeologists working at an excruciatingly slow pace, tidbits about the past are slowly coming to light. 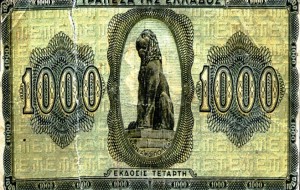 A trademark for the regional unit of Serres, a symbol of Macedonia… The Lion of Amphipolis is undoubtedly one of the most significant preserved monuments of the 4th century BC. It has been restored and stands next to the old bridge of Strymonas river at the regional street Amphipolis-Serraiki Akti. After the last discovery of the funerary enclosure of the “Kasta” mound in ancient Amphipolis, according to the research results of the 28th Ephorate of Prehistoric and Classical Antiquities, the burial monument of the Lion is closely related to the grave marker of the burial mound, which is in fact its foundation and is placed in the central and highest point of the mound, also following the geometry of the enclosure.

“The excavation of the burial mound, which is in progress, has brought to light an important funerary enclosure, unique in its kind, which is dated to the last quarter of the 4th century BC, with marble bases, jambs, crownings and other superstructure parts, of 3m height, and a total length of 497 m. So far 300 metres have been excavated. The unique construction of the funerary enclosure with the use of architectural members of Thasian marble, and the important historical period during which it was built, led us to assume that there are important tombs within the enclosure, which only the continuation of the excavation survey will reveal.

The Tomb of Kasta Amphipolis and the monument of the Lion have comparable architectural features and they both date back to the last quarter of the 4th century BC. The brecciae (fragments of marble processing) found near the grave marker at the top of the Kasta mound, show that there is a big marble monument, namely the Lion and its base” said Director of the 28th EPCA Katerina Peristeri. 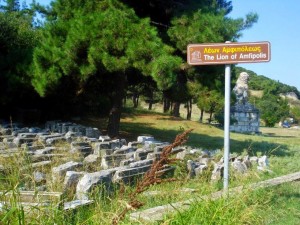 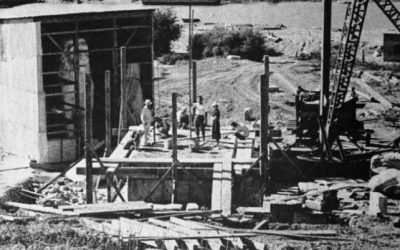 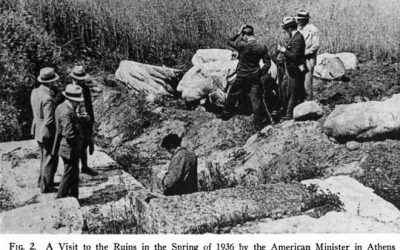 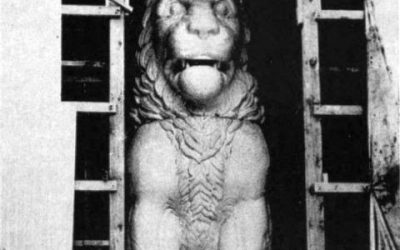 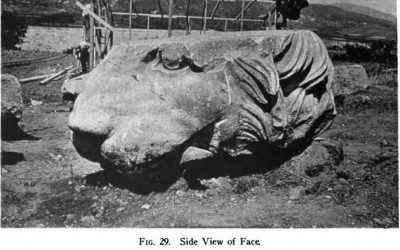 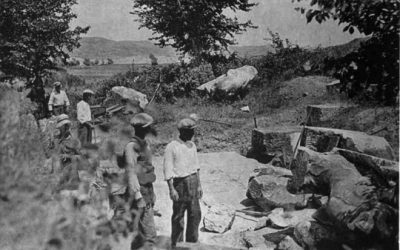 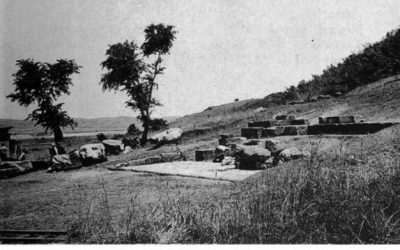 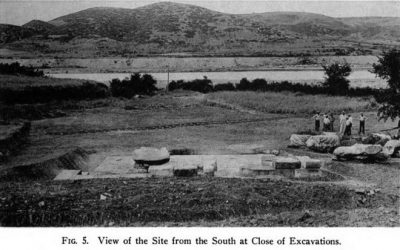 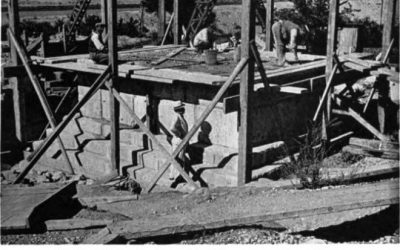 The excavations at the funerary enclosure of the “Kasta” mound revealed that a big part of the enclosure had been demolished during the Roman era. Consequently, several architectural members are not in there original place.

Archaeologist Katerina Peristeri and architect Michalis Lefantzis have conducted a survey to locate the lost architectural parts. Their survey led them to the area of the Lion monument of Amphipolis, where the marble architectural members from the funerary enclosure were found either scattered or walled in the base of the Lion.

This survey shows there is a close relation between the significant funerary enclosure of the Kasta mound and the Lion of Amphipolis, shedding light to the history of the area and the previous theories about the erection of the monument. According to Professor Arvanitopoulos, for instance, the Lion of Amphipolis was erected by Agnon, following his friend Pericles’ advice, dedicated to the 10,000 people who were killed at the Draviskos battle, while according to archaeologist Lazaridis, the monument was built in honour of the general of Alexander the Great Leosthenes from Mytilene. It is also suggested that the monument belongs to Laomedon, general and close friend of Alexander the Great.

During the time to which the funerary enclosure is dated, namely the period after Alexander’s death until the end of the 4th century BC, great historical events took place in Amphipolis. Important generals and admirals of Alexander the Great are related to the region, and Cassander exiled and killed in 311 BC Alexander’s legitimate wife Roxanne and his son Alexander IV.

The Lion of Amphipolis is 5,30 m in height. The existence of the monument became known for the first time in 1912, from a report of the 7th division of the Greek Army. In August 1916, British soldiers who were building fortifications at the bridge of Amphipolis found the marble parts of the lion and tried to transport them to the shore, in order to smuggle them to England. Their efforts were stopped when Bulgarians who had just seized Paggaion attacked them.

As the Director of 28th EPCA points out, “the material of the Lion’s base had been re-used as a dam since the Roman era, and was found by the Greek Army in 1912, during drainage works of the Strymonas bed in order to build the modern bridge. After 1917, the marble architectural members were gathered near the foundation which was misinterpreted as the foundation of the monument’s base. Anastasios Orlandos and P. Perdrizet have been the first archaeologists to study the material until the 1930s. In 1936, J. Roger and O. Broneer continued the study and restoration of the monument at the same place where it stands today, by building a conventional base. At the same time, Ulen found new fragments during drainage works of the old Kerkinitida Lake and moved the material 60 klm away, in Lithotopos, where the new dam of the Lake Kerkini is located. In 1971 S. Miller identified the material in Lithotopos, and it returned to its original place. Miller interpreted the material correctly, but did not conclude neither its provenance nor that it belonged to a circular wall”.

According to historians and archaeologists, the face of the Lion, which has always been a sacred symbol of Macedonians, was looking towards the city, thus expressing the importance and glory of it.

The Amphipolis Lion was erected as a symbolical monument, in order to express the power of the city, as was the case with the Lions of Delos. Furthermore, according to a legend, its sculptor (whose identity is unknown), after finishing his work, which was also the peak of his career, faced an unpleasant surprise. The Lion missed its tongue. In desperation, the sculptor threw the Lion to the Strymonas river, so that no one would see it. 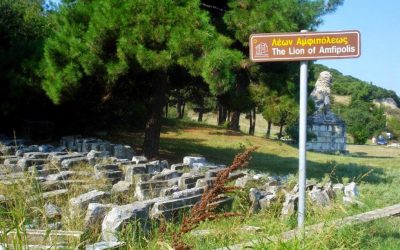 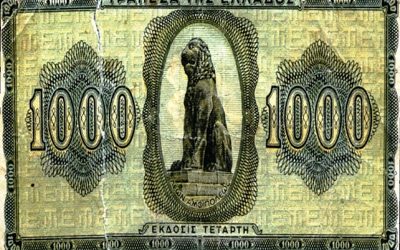